2007 always a bridesmaid never a bride

Is almost new years eve. Looking back at 2007 I am amaze of how fast everything seemed to happen. Here is a quick outlook at 2007.

Races
the policeman's half, before that race I had never run a race longer than 10K, by then I was running enough I just didn't know if I could run it faster than my training runs.

Calgary Stampede marathon, by now I am feeling a bit more confident, I had decided to try and qualify for Boston, I needed a 3:50:00 to do this, I was so nervous I ended up finishing at 3:39:42, I was going to Boston! 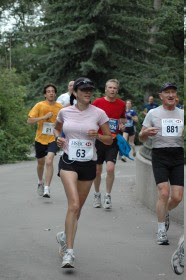 The Death Race, if I was feeling better after my half marathon,after my marathon I was feeling really good, I realized I was in better shape than I gave myself credit when I got up early, run a Marathon, drove home, made lunch for my kids, took them out, drove them to their grandparents a couple of hours away, went out for dinner, all without a problem. then I decided that evening to try an ultramarathon, I wanted to give back to the CNIB before I walked though their doors, running a half marathon didn't seem possible, so running and ultra marathong and collect pledges seem like a great way to give back.The Canadian Death Race was close enough to Calgary that I could be back to work on the Monday after. This was the race that forever changed me, I remember arriving there and realizing I was home, the strangest of it all was all too familiar to me, even though I ended up DNF ing at 94K it stretched my perception of what was humanly possible. By then I was not only a runner but an ultra runner. 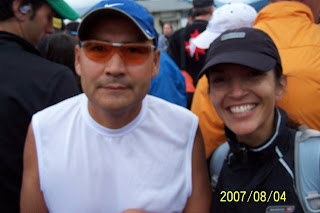 Banff Japer Relay, this race was so much fun, I was in an all female team of 13 and we kick butt, winning gold for the all female team division, my leg was about 16K. The scenery was spectacular, it was inspiring been out there in such a beautiful part of Alberta 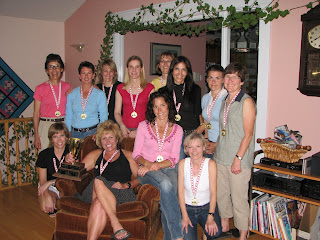 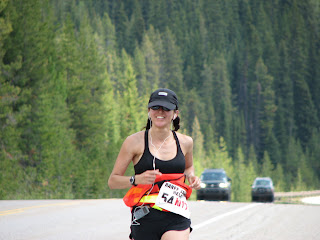 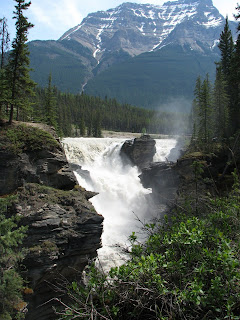 Five peaks in Canmore, this is an other race that changed the way I view running, trail running was my new passion. After this race I was 100% sure of what I wanted to do, run trails and run ultramarathons.

Winterstart in Banff, this will be my favourite race of 2007. This race was a present from my best friend Nadia for my 40th birthday, the race fell on that weekend, she took me and my kids to Canmore where the 5 boys got to play at the water park while we raced in Banff Saturday night, the race itself was only 5 miles, to make it more exciting I climbed Ha Ling that morning then raced in the evening, if at this point had any doubt about my life and priorities, they all vanished, I was surrounded by people that loved me and it felt amazing, turning 40 was not a lot of fun, but it sure helps to be with friends and family 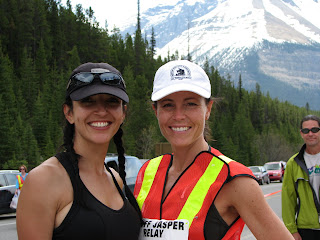 The Last Chance Half marathon this was my last race of the year and it felt every bit like it. I finish this race tired and with a nagging injury, it was time to cut down in intensity and mileage. 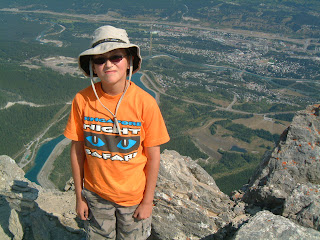 Karl vision kept deteriorating, at the last parent teacher interview his teacher recommended teaching Karl Braille because he is having trouble keeping up with his classes. His spirits are intact, he discovered wrestling and he had a great time at his meet. Of course I wish Karl had never been diagnosed with a progressive condition that is making him blind and left him visually impaired, even if there where to find a cure there are things that he will never be able to do anymore, but I am thankful that he is taking it the best possible way. We sometimes have no control of what happens but we always have control of what we do about it. Karl is a perfect example of how all you need to have a great life is the right attitude.


Hans too had an amazing year, he straggled a bit at the beginning of the year, he was a bit angry because I had pulled him out of sports, I had a hard time scheduling all the activities. Once Karl's life was under control Hans was able to have more of my attention, he played soccer in the summer then he try out for the Sea Lions Swim team and in a short time he became their little star. His bone scan was abnormal but turned out to be nothing after further testing, Hans has Osteochondroma and has to undergo testing every year. At the end of last year I was unsure of how I was going to find the strength to keep my family from falling apart when all I need was them, Hans and Karl showed me what true strength really is, not the superhero kind of superpower, but the silent, quiet strength that comes from within, all I needed to do is to sit quietly and hear it inside 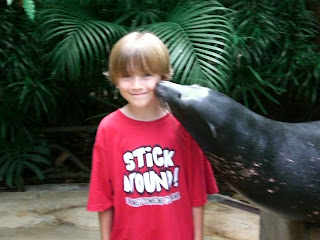 2007 was a year of many highs and some lows, in racing, it seems like I was almost there, like a bridesmaid never the bride. The beauty of almost is that it is that much closer, is all attitude and perception, half empty or half full. My life was definitely only half empty, but I am looking forward to toasting to a a fuller glass next year.
Posted by Norma Bastidas at 10:14 PM 1 comment:

I run therefore I blog

This has been the easiest week to get up at 5am to run. Even when the weather said -25c I couldn't wait to lace up to go out. This week instead of my usual 11 miles I was running 16miles/day. The reason? Scott Dunlap. I am a huge fan and have read his blog for a long time. I have never post a comment, why bother I though, I often feel like the Anna Kournikova of the ultra world. I never wanted him to know who I am, I just wanted to silently admire him form afar like a teenager with a crush.and there I was telling him how much I like his blog and he answer it! His words where kind and encoraging. Well unless you are a runner you probably don't know about him, but to me it was like having Lance Armstrong replying to your fan mail and wishing you luck on your Tour of Bowness. I am amaze of how giving the ultra and trailrunning community really is. I have talked to ultrarunners and they patiently answer my questions, wishing me luck even tough our goals are vastly different. I am a finisher, don't make a mistake and they are the elite. But down the line I feel closeness because is the passion that brings me closer to them, that and the common interest in trying yo figure out the exact point where the body gives up.

Scott has no idea of what kind of influence he had on me, and I am grateful for that! Googling somebody without care on a Saturday night is not the behaviour of a grown woman. But we need heroes, we need people to admire, in a culture where we build people up just to tear them down just as fast is not something I aspire to. But I love when somebody reaches fame and stays humble.

Going extra hard this week was a sign of how much I admire him. Is not like he is ever going to goggle me or anything but somehow I feel the need to do better, and in my runs I have been inspired and even dared to dreamed of finishing first at the Frozen Ass 50K. Now the odds of that happening are pretty slim, let's put it this way, looking at last years photos, I came across a picture of a very cute guy, I soon realized to my panic that it was my competition!. But something shifted, just being out there, being part of it is enough satisfaction for me, I am proud of saying I am an ultrarunner, even though I often get the " why" look it makes me happy. Is not like I need to look very far to find heroes, just looking at Karl and Hans everyday reminds me of the true strenght of the human spirit. I watched a movie of the first and only blind climber to climb Mount Everest and I called Karl to my room at the exact moment when he makes it to the summit, of course I am crying hard, and I would be even if Karl didn't have cone dystrophy. Karl just looked at me and said " what's the big deal?" "he is just blind mom" then it hit me, Karl doesn't see many limitations, I do. I am just in awe of how gracefully my kids are handling the changes in our lives, our world turned upside down a year and a half ago and they handled it with such grace, if you know me well you will know I didn't. But watching my kids everyday has giving me the strenght I needed to move forward. And running has brought joy to my life, out there in the mountains on my own, there is no better feeling that the quietness of my footsteps on a trail. I don't know if I am happy because I run or I run because I am happy. Doesn't really matter. Is out there where I find myself, find who I truly am. A mother, an ultrarunner, a friend, a sister, a daughter and that is good enough for me.
Posted by Norma Bastidas at 8:04 PM 1 comment: