Well is been almost a week since I participated in The Fast Trax Ultra last Saturday. I decided to wait until they posted the results to give a proper race result. Usually I am aware of how my race went, or sometimes I don't even care. This time I decided to stick around to the end.

Fist I should tell you more about the days leading up to, if only because I like talking and second because I truly believe it had everything to do with the race results for me.

Days leading to the race I decided to buy a GPS Garmin StreetPilot c550, just to avoid being late again. Also I found a participant for the 50K that wanted to carpool from Calgary. I was a bit worry since I was concerned about my music taste which is eclectic to say the least, not all Latin music is sexy, specially if it is mariachi music. Zoltan a young guy on his way to Edmonton on what it was his first ever ultra and I drove on Friday around noon. I had told him to bring his i pod to take turns with the music. When it was his turn I quickly realized his taste was around Enya( is she still making music?) And ambience music (think waterfalls and wind chimes) his turn never came, and it reinforced why I am still single, I am bad a compromising.

We arrived at the campground 5 hours later. I was not feeling well, I didn't taper for the race since I am suppose to get stronger, I also found out I was registered on the 50 miler not the 50K as I originally intended. I went to bed early but when I got to go to the bathroom, it was so cold that my legs cramped right out. The next few hours where distant memories of fever and painkillers. I woke up three hours later not sure if I was going to be able to run.

We arrived at the race, I decided to keep the 50 mile instead of changing it to the 50k, and since that distance always have the biggest number of participants. In my mind as long as I took it easy and aimed to finish, I was going to be OK.

The race was at Godlbar Park and it was a 10K loop, I was supposed do 8 loops and a bit since it's a bit more than 80K. At 6 am we all started, I stayed behind, for most of the race, Petra Graen lapped me twice to win the 50K race first overall at 3:43:34, Wayne Gaudet was second and fist male at 4:08:16. At 45K I was still third last overall and even Rick Webb and Carmen Pavelich who would eventually win the 100k race at 8:07:55 and 9:59:44 lapped me. This is the first time on a race where the words of encourage where, “come on, pick it up”, ' You can do it"," show us what you got", but I just didn't want to risk injuring myself. I kept a pretty conservative pace for the first 45k. Then something amazing happened, I started to gain on the people ahead of me, I was going slow enough that i didn’t need walking breaks, by the time I crossed the checkpoint at 50K I feel good enough to pick up the pace, my hamstring was tight but not hurting. Armed with Ibuprofen, I decided to kick my pace and avoid stopping at the aid stations, the next 30K I barely slow enough to grab a bottle of water or perpetuem that was conveniently mixed in a bottle. By the time I reached 57K I passed the female lead of the 50 miler and I managed to unlapped myself from Carmen. At this point there where a lot of people slowing down but I was feeling just fine.

I miraculously finish top female at 8:38:27 and second overall behind Logan Beulieu whose winning time was 7:35:11. 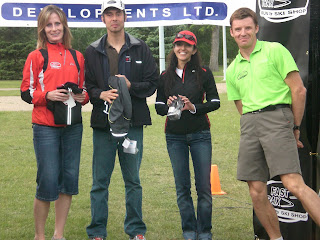 The moral, pacing does work, at least this time it did. I don’t know if the outcome would have been the same if I had speed up ahead with everybody else. I do have to say it's hard to stay behind, especially since it was a loop course and I got to see everybody that was ahead of me each time they turned around. Sure they high five me, at one point I decided to play my music mariachi and all loud enough for me to just tune out and listen to my body.

Jack Cook of Fast Trax did a wonderful job at his second Ultra. It was perfect weather and the flat course meant 5 times where improved over last years times included mine. Jack is applying host the National 100km Championships in conjunction with the 50km and 50mile events. Edmonton is a great city to host sports events. I was lucky to participate in the World Masters Games in Edmonton in 2005 for Triathlon and I was impressed on the venues and the quality of the volunteers.

I want to thank Peter Lubbers for the help. I emailed him panicking last minute because I was unsure I was training smart. He not only reassured me, he also wrote a detail plan for me to follow :- ) 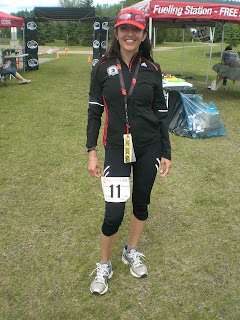